On Coupling and the Whitehouse 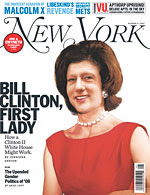 So, I was reading Roomie's copy of New York Magazine today. I mean, after seeing the cover art of femme-Bill, I felt compelled. I had to see what was inside - if Bill as Jackie O. (drag photoshop style, of course) was the on the outside.

While Jennifer Senior's article "How a Clinton II White House Might Work" followed the usual premise of the Husband-as-First-Lady role reversal riff, I was surprisingly refreshed by Ariel Levy's "The Upended Gender Politics of '08." Levy (who I don't always quite agree with) credits Hillary's tone-setting tenure as first lady and subsequent independent political carrer as what has made first-wives-to-be into campaign spokeswomen who are generally accepted by the public:

But the main reason Elizabeth Edwards can say what she wants, can speak so freely, so knowledgeably, and so aggressively - and still seem so cozy - is that by actually running, Hillary Clinton is doing Edwards and all the other candidates' wives the favor of absorbing much of the anxiety, suspicion, and contempt many Americans still feel toward accomplished women - which would otherwise be directed at them.

What both of these articles made me contemplate is the way in which career couples are read in our society. Complicating the personal/political/public/private, marriages are now under the microscope - and perhaps being studied with a new lens? Or perhaps not. While such power couples and "gender reversals" are unique to the '08 elections, it seems that all this fuss is being created more by the fact that the culture can't metabolize such working marriages (with spouses who both work in their own right) than by the actual issues up for debate.

Which leaves me wondering...How can we stretch the concept of partnership* so that successful women and men can both have their careers without having to play second fiddle or having their career choice limited to the "family" business? Because, right now, it seems that spouses can't share the spotlight or even perform separately on their own stages in this metaphorical theater of career life. As an audience, we seem to be demanding that only one spouse can have a leading role. Which, in a world that necessitates dual earner households, seems to be a mold that society won't fit into anymore...And that I don't think I necessarily want to call back for an encore either.

*I use partnership here to move away from the heteronormative nature of the debate at present and to attempt to be inclusive despite the fact that the public debate hasn't quite reached the stage of considering Mr. President and Mr. First Lady or Madame President and Mrs. First Lady.

Please note that as my M.A. thesis project is complete, the George Washington University is no longer overseeing research conducted in conjunction with this blog (effective June 2007 to present). The Informed Consent Materials created while this blog was under GWU's IRB oversight are still available for your information and the principles outlined in them are still being used as a general guide for my continued work.
Posted by Unknown at 9:35:00 PM

Email ThisBlogThis!Share to TwitterShare to FacebookShare to Pinterest
Labels: Links