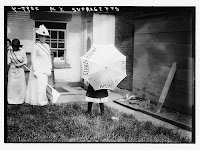 In his recent Op-Ed column "Questions for Dr. Retail" in NYTimes, David Brooks compares Senators Clinton and Obama appeal to different groups based on their educational background. Arguing that Hillary's straightforward, no-frills approach appeals to individuals with lower education levels and that Barack's inspiritational offer of hope and change resonates with more educated individuals, Brooks breaks down voting trends through the lens of commodity.

While I am always wary of sweeping generalities, it is refreshing to see the Democratic candidates' abilities to attract voters compared on other demographic categories than the usual race versus gender ruminations. At the same time, the way in which class and education are confounded and generalized is problematic.

What I do think is right on about this piece, though, is the way Hillary's "here's the plan" style and Barack's "here's the vision" style are nailed by Brooks. In making my own ballot decisions, my presidential pick was based largely on which candidate was giving me the information I needed to evaluate the feasability of their goals actually being put into action successfully. My Hillary leanings (revealed! and*) aside, my dream Democratic ticket would yield bumper stickers with both names - Clinton and Obama. Because I think a pairing of practicality and experience with vision and inspiration is just what the US of A needs right now.

*I have been a bit hesitant to reveal my voting preferences here. Not only do I not want to alienate my readers and to avoid getting cornered by the real-feminists-are-voting-for fight**, but I also have wanted the freedom develop my political stance out of the spotlight. But I can't keep my election musings to myself any longer!

**Real feminists vote based on the issues that are important to them. There is no monolithic feminism in the
U.S. - so no one should be surprised that feminists vote with the same diversity.

Thanks for the photo, LOC


Please note that as my M.A. thesis project is complete, the George Washington University is no longer overseeing research conducted in conjunction with this blog (effective June 2007 to present). The Informed Consent Materials created while this blog was under GWU's IRB oversight are still available for your information and the principles outlined in them are still being used as a general guide for my continued work.
Posted by Unknown at 3:05:00 PM