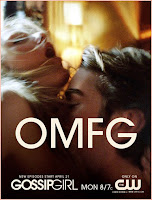 The Gossip About Those GossipGirl Ads

I was taking a leisurely jaunt in Manhattan when I first came across the controversial GossipGirl ads that have created so much buzz for this CW show. Promoting this TV series based on the popular teen books about an elite prep school, the advertisements I saw were poster-size and plastered all over a construction site. My response? OMFG, for sure. And WTF, too.

Now my reaction to these ads is not negative because I am prudish or "sex-shaming." I'm just struck by how "soft-core" these mainstream images are. Like Ariel Levy, I'm concerned about how "pornified" society seems to be these days. But my take on the consequences of this "pop culture gone wild" is more in line with the views of Jessica Valenti. As Jessica smartly states in her book Full Frontal Feminism,

I think that while the fast-growing focus on sexuality [in popular culture] certainly has the potential to be dangerous for young women, it's not necessarily all bad. What is bad is that young women seem to be confronted with too few choices and too many wagging fingers...We're all trapped by the limiting version of sexuality that's put out there - a sexuality that caters almost exclusively to men.

Jessica goes on to make a call for young women to critically engage with mainstream images promoting an impossible and often unattractive version of female sexuality and to then make informed decisions about their own sexual lives.

I think that the GossipGirl ad campaign is a perfect example of the type of analysis Jessica advocates. What is going on in these ads? Is it just a shameless use of sex to sell an already racy series? Is female pleasure exploited or privileged by featuring an actress's "o-face"? What's up with the social mores contradiction of this television show being marketed to the very same American teenagers who are being taught abstinence-only sex ed. in school? WTF, you know?

Luckily, feminist scholars/thinkers like Levy, Valenti, Kathleen Sweeney, and Deborah Siegel are writing about these issues - and brining more to the conversation than just WTF.

Share your recs and takes in the comments section, too!

Cross-posted at Girl With Pen


Please note that as my M.A. thesis project is complete, the George Washington University is no longer overseeing research conducted in conjunction with this blog (effective June 2007 to present). The Informed Consent Materials created while this blog was under GWU's IRB oversight are still available for your information and the principles outlined in them are still being used as a general guide for my continued work.
Posted by Unknown at 12:33:00 PM